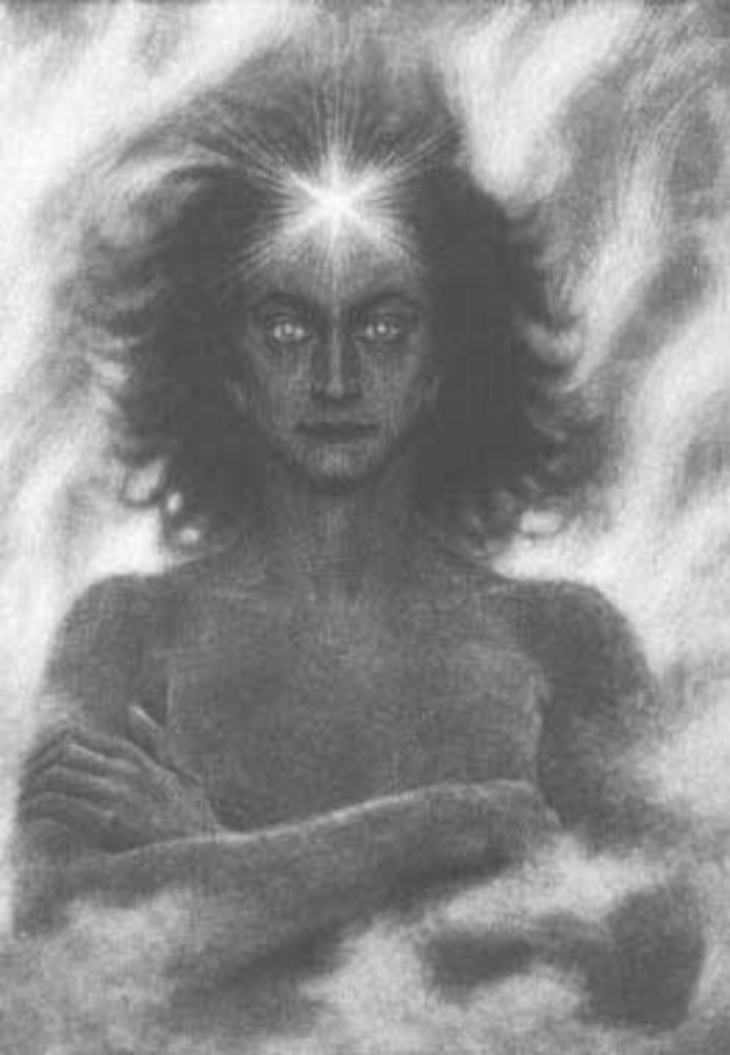 There can be no esotericism without exotericism. There can be no internal without an external. Your body is a temple with the spirit residing within. The mind, body, and spirit must all be pure. The Übermensch of the future, the true descendants of the Olympian-Hyperborean race will not only be pure in spirit, but also pure in mind and body. The mind must incessantly advance towards knowledge, concurrently guarding itself at all times from the destructive influences of our age. A heightened awareness  of these forces will demonstrate that the solitary purpose of the Demiurge is to impede our ascent to the northern wind, making our spirit descend into the darkened abyss and trapping us in the endless cycle of samsara.

Our minds are bombarded by external stimuli daily: The words that we read, the sounds that we hear, and the emotions that we feel. The masses of humanity are highly susceptible to the social conditioning of the Demiurge, the cultural engineers of our age that proliferate materialism, atheism, economics, and widespread nihilism. However, our ancient Hyperborean forefathers taught us that through asceticism and spiritual discipline, we can restore our divine blood-memory by purifying ourselves inwardly.

One must meditate daily. The room should be darkened, silent, and in a comfortable setting. Ideally, one should meditate in a cell or a small closet-like area that will eliminate any distractions from the outside world. Calm, ambient or ritualistic music is highly recommended.
Meditation allows us to communicate and become one with the Olympian white gods of the north. Beginners should devote at least 30 minutes to an hour a day, mainly focusing on stilling their untamed mind and meditating on the eventual death of their physical bodies. The advanced visualizations of the Hyperborean symbols of  power will be integral to your spiritual practices. I will be writing extensively about Hyperborean spiritual practices in the future, including the hidden symbols that we will use.

Celibacy is the intentional, self-denial of sex that acts as a purifying force against the untamed mind. Deriving from the two Proto-Indo-European stems, *kaiwelo- “alone” and *lib(h)s- “living”, celibacy inspires metaphysical sovereignty and Kshatriya-warrior like discipline in all aspects of life. The original Hyperboreans were asexual and reproduced by non-physical means that allowed them to harness Vril and live in a world of perpetual higher consciousness. The eventual fall of Hyperborea occurred when reproduction degenerated into the physical act, resulting in the intermixing of their divine Olympian blood with the people of the earth. This event ended the Golden Age, reversed the two poles, and resulted in the mass migration of the Hyperborean people across the world.

The most powerful weapon of the Demiurge is sex. Sex can bring life or can bring death. For men especially, an overindulgence of sex, engaging in the self-harming act of masturbation, and exposure to pornography (that is demonic in nature) can dim and extinguish the radiant green light of the Black Sun that once shined brightly inside him.  Seminal loss in men can result in a draining, succubus-like state, similar to the spiritual “dark night of the soul” that brings depression, fatigue, inability to concentrate, memory loss, passivity and cowardice, irritability, lowered testosterone and sex drive, and other detrimental side effects to the indiviudal.

The individual of the Olympian-Hyperborean spirit seeks all things above and does not fornicate with those beneath him in spirit! Promiscuous sex and the bestial, primate-level act of masturbation are the two most carnal forms of sex. Both are entirely bound to the lower frequencies of man, lacking any transcendental or higher spiritual qualities. However, an individual that is married or in a fulfilling relationship should comprehend the higher, transcendent meanings of sex and demonstrate self-control and moderation. The highest form of love is non-physical, when the man and woman become one through spiritual enlightenment, as was  practiced by the ancient Hyperboreans. However, modern couples may practice the Olympian form of ritualized, transcendent sex that forgoes the male orgasm and does not sacrifice his essence. Further details of this will be posted in the near future.

“And while the ultimate test of this initiation was taking place in that ancient night, with a man and a woman lying naked side by side, separated by a sword, without taking possession of each other’s physical body, she explained to him in her musical voice full of longing for eternity: ‘The light doesn’t come from the east. Light is only truly light in the depths of midnight. Now is the depths of midnight. The followers of Lucifer, of the Morning Star, do not beg to be allowed into heaven. They demand to be, because they feel that they have done everything possible to merit being deified. At the end of our road, no fusion with a God or redeemer awaits us. Our way is not the way of ecstasy of the saints but the way of separation of the magicians, of the White Gods who have become absorbed into the sources of creative energy. Creating worlds, loving each other inside and outside eternity. We do not beg, like the lunar troubadour: “Take us back to where you took us from!” We are going to try and change God, giving him a face. Therefore, my love, do not take possession of my body. Let us not create children of the flesh. I will make you pregnant with the son of death. And we will both remain virgins.’ […]“
– Nos: Book of the Resurrection – Miguel Serrano

One cannot progress in his inward journey by being overexposed to modern society and its inhabitants. Unless the individual is of a high, warrior-like spiritual discipline, the ultimate end of oversocialization and overexposure to modernity is our complete absorption into the chaotic spirit of the age. One must guard his mind at all times. If one is indifferent about what he is exposed to, even the smallest of poisonous influences may alter your unconscious mind.
Detachment from the stimuli of human interactions will have profound benefits in your life. Solitude can take many forms: From meditating alone in your room, exploring and experiencing nature, or simply avoiding public areas for a while. Personally speaking, I spend most of the week limiting my exposure to others, such as crowded areas and unpleasant company. However, like all things in life, moderation should be used and I do occasionally interact with others in a public setting, such as meeting with like-minded friends to discuss spiritual or philosophical issues, going to art shows, attending musical concerts, and doing research at my local coffee and tea-house. If your career prevents you from avoiding others, embrace a detached and stoic state of mind, never allowing others to affect your spirit through “psychic vampirism” and their draining-like influences.

Fasting is willingly abstaining from all food and drink, signifying inner discipline and devotion.Fasting will improve your meditation, clear your mind, and rejuvenate your soul if practiced with a positive attitude. Individuals should practice fasting once a week, preferably on Sundays and gradually progress for a longer duration. Brahmins may fast according to their experience and current state of health. Those who identify themselves with the warrior caste should only abstain from certain foods and drinks, since long-term fasting will obstruct your martial training, energy levels and physical strength.

Brahmins should have a vegetarian diet; since the consumption of meat absorbs the negative energies of the animals you consume and will transform your body into a “temple of death”, a cemetery of sacrificed animals. Kshatriyas may eat meat in moderation for muscle mass and strength, although there are many high-protein vegetarian substitutes, such as Whey Protein . Processed and fast-foods should be avoided, while simple and healthy meals should be encouraged. Artificial and genetically modified foods should be avoided at all costs. Those of the merchant and peasant castes may eat what they please, since this article does not concern them.

Drug Use and Alcohol

The use of drugs does not allow the individual to transcend space and time and is not a viable means of spirituality, since it confines the individual to the physical realm and nothing beyond that. Many followers of various left-hand path circles are completely ignorant of this fact, mistakenly viewing their false “spiritual” experiences as an authentic spiritual state. An authentic spiritual experience can only come from within and not from an external substance. The same goes with alcohol. Alcohol can result in lucid thinking, opening up hidden areas of your mind, but should be abstained from or used in moderation. Although drinking alcohol is a part of the various European cultures, alcoholism is a major problem for our people. Smoking should also be avoided, as it affects your prana, your “life breath” and inhibits your capabilities of harnessing Vril.

Always be mindful of your words. The vast majority of conversations are trivial in nature that misuse our gift of speech. Speech is a distorted reflection of your inner spirit, since the meaning of words and language are severely limited to the terrestrial world and there are many things that cannot be spoken of. One should focus on avoiding harsh language, gossiping about others, using contemporary speech patterns, and words of cowardice. Sentences should be well thought out before speaking and saying absolutely nothing is generally the best option. Vows of silence and selective communication are both worthy ascetic practices.

Many “occultists” only focus on their interior life, while neglecting their physical bodies that result in grotesque obesity, health problems and a weak disposition. One’s outer appearance is an indicator of one’s inner spirit. Men should exercise at least 3-4 days a week, focusing mainly on strength, endurance and agility. Exercises should focus on compound exercises that use multi-joint movements that work several different muscle groups. Examples of such exercises are various forms of squats, deadlifts, bench press, back rows, pull ups, etc. Men should also have a strong abdominal core as well, since this area is the center of all your strength. The symbolism of the swastika and the black sun would be meaningless if it was devoid of a divine center. The study of martial arts should also be encouraged, especially Russian Systema, ancient Indian martial arts such as Kalaripayattu, and Judo. Women should stay active, long walks through nature, cardiovascular workouts, and light aerobic exercises. Although modern-day yoga can provide great health benefits, it is completely devoid of any higher spiritual connotations, degenerating into another modern-day “exercise fad”. A good alternative would be studying traditional forms of T’ai chi ch’uan or Runic Yoga that implements yoga postures according to the Runes of the Elder Futhark. I will devote an entire article on Runic Yoga for our female readers at a later time.

Avoidance of Modern Forms of Entertainment

Overexposure to modern forms of entertainment can also hinder your spirit, by the use of subliminal messages and occult psychological manipulations. Modern-day pop music is filled with countless subliminal messages that substantially alter the mind and soul of its users, turning them into nihilistic- materialist drones that become ethically indoctrinated by the Demiurge. Notice the internal changes within yourself, after listening to popular music, television shows or degenerate Hollywood movies. These thoughts and feelings are not your own. They are foreign to your spirit, unnatural to you. Now compare this to the state of meditation and the feeling you get while listening to beautiful symphonies or folk music, or reading about philosophy and spirituality. The former degrades our spirit, while the latter elates our soul and brings us to higher planes of existence. The spirit of the age is dedicated to your spiritual devolution and descent into materialism; pop culture and modern entertainment are their primary tools.